The Clotilde von Höpken collection is objects she inherited from her father. As she did not share her father's interest in sailing and marine painting, she sold the collection to the Swedish Maritime Museum in 1939.

A collection from a father

Clotilde von Höpken was born to an aristocratic family in Bogesund Castle outside of Vaxholm where she grew up. She also spent her childhood in Stockholm and England.

When her father Nils Albrecht Stephan von Lantingshausen von Höpken died in 1906, Clotilde and her brother Nils inherited the castle and a large number of valuable possessions. Many of these were connected to their father’s great interest in sailing.

Neither Clotilde nor Nils shared this interest, and neither had any children who could take over the collection. 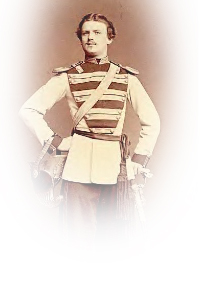 Like his daughter Clotilde, Nils Albrecht Stephan was born at Bogesund Castle. He lived in the castle, which he owned, for the majority of his life.

Nils Albrecht Stephan’s great passion was sailing. He owned a number of large sailing yachts and was vice chairman of the Royal Swedish Yacht Club for a while. He designed yachts, made models and was a prolific painter. A favourite subject was marine motifs, particularly racing yachts.

It is not unusual for collections to be bequeathed to heirs who do not continue to collect and rather sell or donate them. Clotilde and her brother Nils disagreed on how all the property from Bogesund Castle should be divided after their parent's death. More than twenty years later the inheritance was settled. The paintings and models by her father, which Clotilde received, she sold to the Swedish Maritime Museum in 1939.